Long before ever hearing “coronavirus,” I’ve advocated for proper handwashing! BTW, I also clean (using an alcohol swab) tops of public keyboards I share with others. I know you’ve already viewed demonstrations on the news lately, but this is the best I’ve seen yet, even though he didn’t sing Happy Birthday! Thanks, John.

At the opening of Black History Month in 2020, ASALH invites all of America to reflect upon the annual theme “African Americans and the Vote.” The theme calls for the commemoration of two anniversaries— the sesquicentennial of the ratification of the Fifteenth Amendment, by which black men gained the right to vote after the Civil War, and the centennial of the ratification of the Nineteenth Amendment, by which women won the vote. Yet, as we celebrate those constitutional milestones, history teaches us to be mindful of their limits—to recognize both the strides and the setbacks for African American men and women. In highlighting this precious right, so fundamental to democracy, we should boast of Senator Hiram Revels of Mississippi, Congressman Robert Brown Elliott of South Carolina, Governor P.B.S. Pinchback of Louisiana, and all the other black elected officials who courageously stood up for the rights of their people during the Reconstruction era of the 1870s and, afterward, in the bitter decades to follow. We should remember, as well, those in freedom’s first generation who lost their lives simply for attempting to register to vote or to exercise their right at the ballot box, as was the case in the Colfax Massacre in Louisiana in 1873.

The triumph of women’s suffrage was also accompanied by the duality of gains and losses, since the achievement and denial of voting rights proved equally true for black women. Thus we should certainly champion the work of black suffragists, such as Mary Church Terrell, Ida B. Wells-Barnett, and Nannie Helen Burroughs, who not only spoke out but also organized the votes of black women under the banner of being “in politics to stay” during the 1920s. But we should always keep in mind that the great majority of black women, just as black men, in the South, would not wield the ballot until the Voting Rights Act of 1965. Even then, the vote came at a dangerous cost, including beatings, loss of economic livelihood, and even death to members of the civil rights generation of African Americans who dared to register to vote in the Deep South, in addition to blacks and whites, alike, who went South simply to encourage and facilitate voter registration.

Through voting-rights campaigns and legal suits from the turn of the twentieth century to the mid-1960s to this very day, African Americans have made their voices heard as to the importance of the vote. In this election year of 2020, let us show the same unyielding commitment, as did our fore-parents, to making our votes count.

Bryan Stevenson, who never fails to be as informative as he is inspiring, speaks on this question. Click here to watch and listen to who Stevenson suggests we are and who we can be. His presentation is from 2012. Have we changed? In what ways?

Are you a young person who wants to help make a difference? Click here to learn a way. Although the deadline to apply for this opportunity in 2020 has passed, now is the time to begin preparing for the next time this door opens (September, 2020) for 2021. Just do it.

“...In Christianity, many of us intuitively recognize a disturbing connection between the treatment of women and some difficult verses and words in the Bible. While some Christians rationalize sexism and patriarchy by appealing to the “plain reading” of Scripture, others instinctively question whether what they see on the pages of Scripture is a faithful and consistent translation of the original text...” 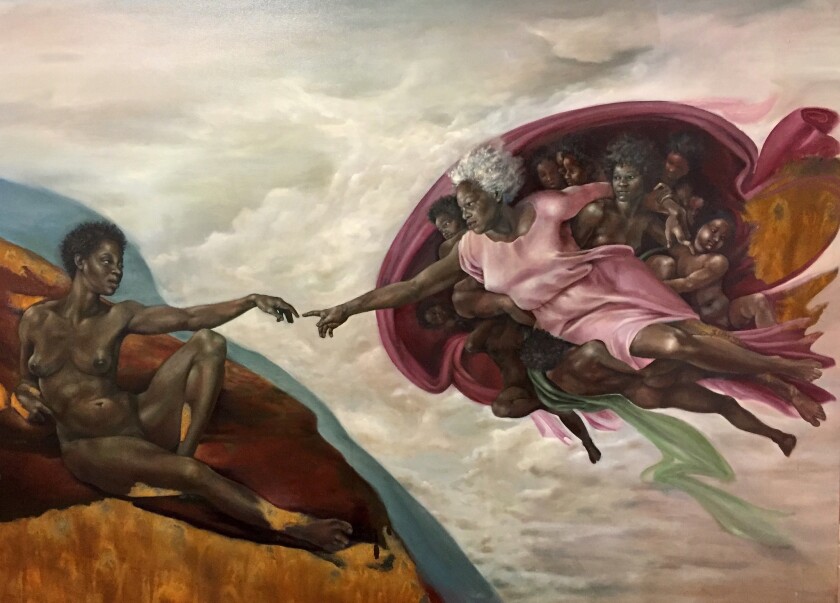 The artist is Harmonia Rosales, a Chicago-based Afro-Cuban painter. This work was created in 2017.

The Well of Dyersburg
Powered by WordPress.com.